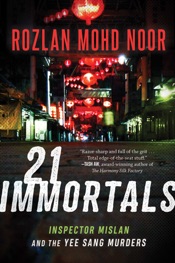 Inspector Mislan Latif's final case after a long night's shift could be his last. Called to a wealthy neighborhood of Kuala Lumpur, he finds a crime scene unlike any he has encountered before: pristine, the victims a family seated at dinner, Mona Lisa smiles fixed to their faces, frozen mid-gesture around the traditional Chinese New Year dish of yee sang, signifying prosperity, longevity, many good things—though it's not that time of year. It makes an eerie, chilling tableau of death, but signifying what? The celebrity of the father, fashion magnate Robert Tham, has already drawn a media throng, and soon the upper echelons of the police have taken an interest, bringing pressure to solve the crime quickly.

But every clue points to another unknown. This isn't the primary scene: where is it? What are the motives of Tham's younger business partner, the attractive Miss Irene? What of his connections to an old-school criminal gang and the triads? With rival units of the police seeking to co-opt and, he suspects, bury the case, Inspector Mislan's investigation takes him to every level of this modern, multi-ethnic, American-pop-culture-influenced society, to where moneyed power and influence demand their say. Maverick, hard-boiled yet tender, a single father raising a young child, Mislan must rely on his team—and the politically savvy woman leading Major Crimes who is his boss—to support, protect him from the corruption above, and help find a way to ensure the course of justice. PDF free